It was 54 degrees in the Twin Cities today. That’s local news I can get excited about. It’s the second warm day of the year and everyone feels good again. This afternoon I hung out at Nina’s and took a long walk around the neighborhood. There were people everywhere, and I swear they looked a little confused, wandering around Summit Avenue as if they were just released from a long stay in a sanatorium and didn’t know what to do with themselves. I hope no one got hurt.

And then there’s me. I think I am back again, too. I stopped blogging for awhile because I have been finishing a big freelance project–editing, developing, and, some would say, ghostwriting, a 150,000 word encyclopedia of energy medicine, and was up to my eyeballs in chi, prana, and spinning vortexes of light.

Guess what? I am done. I still have to clean up a few things, and there is still a bit of a glossary to deal with, but every chapter, across all four sections, is ready to go. This week, I’ll tidy it up and send it off into the world for its final grooming.

To celebrate, I declared today a Carrie holiday. I didn’t set an alarm. I spent 10 bucks at Nina’s on coffee, oatmeal, and the print edition of the Times. I went to Cooks of Crocus Hill to get a kitchen scale. I went to the library to photocopy Martha Stewart recipes and put a bunch of books on hold. It would have been a perfect day if only I had bought a new handbag.

To go with the newness of spring, I also tried two recipes I’ve never made. They’re light, bright, and easy to make, so you can spend less time in the kitchen and more time walking around town with everyone else.

This recipe looked at me from the pages of Martha Stewart and begged to be made. It is super easy and stylish. It’s great for a party because you need to prepare it early and leave it sit in the fridge. I had dill on hand, which is a little more interesting than parsley and worked perfectly with the flavors. I like how you can see the drops of lemon juice on the soup, which makes me think that a spin of extra virgin olive oil would work nicely too. This soup is an empty palette waiting for you to throw something pretty on it (and it tastes great, too). 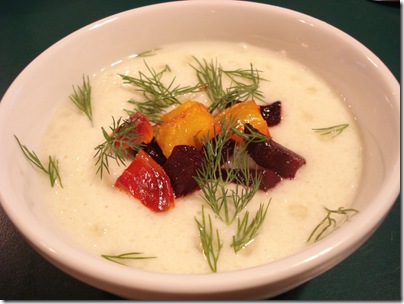 Here’s a surprising combination from Clotilde. This is a perfectly strange and earthy spring appetizer. It looks a lot like guacamole, so it’s called peacamole, but that’s where the resemblance ends. This dip consists of peas, cilantro, almond butter, tabasco (I used rooster sauce), garlic, and salt.

Peas and almond butter! Although I’m a creative cook, I would have never thought to pair these two together. But I’m so glad I did. The sweet and snappy peas, earthy nuts, and generous cilantro were made to go with lavash and a glass of white wine. I experimented with a second batch, adding lemon zest and using dill rather than cilantro. Nah. No need to mess with a good thing.