In my wandering around town, heading to the market, the laundry, or the pub, I suppose, I perked up when I saw that the superette on the corner of Selby and Dale closed its doors. One moment it was full of soda, cigarettes, chips, sunglasses, and all kinds of mismatched junk peering out the front windows. The next it was empty as day. This place is across the street from Mississippi Market and Paisano’s and in the same building as Muddy Pig, and it’s really attractive, with big windows and a prime location that would let people inside sit contented and watch the world go by.

In the fantasy version of my life, I have a ton of cash and I rent the space to create what I’ve always envisioned, in my clever but idea-overloaded mind, as “my cafe.” It’s called Flâneur, serving high-class bohemian food with excellent coffee, tea, and a collection of apéritifs and digestifs. Flâneur encourages extended periods of flânerie, loosely defined as the strolling of urban

streets. But a flâneur is also a connoisseur. He (or she, as the flâneuse might have it) has a keen understanding of where a good experience might lie, whether it’s following the most interesting street or stumbling into the best cafe. In the spirit of it, at my counter, you might order a sandwich and a pastis — liqueur that comes with a small carafe of water, a brilliant pairing that can make your drink last for almost as long as you choose. To use Cafe Maude’s language, my cafe would be a spot of civilized leisure.

For better or worse, Flâneur must remain a fantasy, at least at this address. The space has been rented. A sign in the storefront announces a June 2009 opening of Living Bread, which the Internet tells me is a store that promises to put “Catholic life at your fingertips.” This strikes me as odd still. I can’t imagine a shrine to Catholica in such a prominent intersection. Aren’t religious supply stores usually, I don’t know, not so . . . obvious? As a good flâneuse, though, I’m thrilled that it isn’t a national sandwich chain, and that my neighborhood will soon have yet another storefront to amble into. And maybe if I’m lucky, I’ll even be able to replace my broken Jesus nightlight.

Since moving to the Twin Cities 3-plus years ago, I’ve been a one-salon kind of girl, getting my hair cut, colored, and styled at Evolution on Lyndale, a salon owned by Matt Swinney, who I wholeheartedly vote the best stylist in MSP. Right, I know this is one of the two salons I’ve been to, but I still know he is worthy of the vote. He has impeccable taste, graceful styling skills, and a salon that absolutely comes from his heart.

Today Matt told me about the restaurant ŌM opening at 401 First Avenue North in Minneapolis in the spring. I’ve been following ŌM’s Tweets, so I perked up when he told me about the plans for the food and suggested I sign up to be an “ŌM enthusiast,” which promises to make me among the first to receive news, announcements, and “exclusive” invitations.

ŌM’s concept and presentation look exceptional. The James Beard-recognized cookbook author Raghavan Iyer is the “culineer,” which Jeremy Iggers reports is short for “culinary engineer.” How snappy, which is what the interior and fresh Indian food will likely prove to be. I hope ŌM will fill a gap in the Twin Cities dining scene. Creative, contemporary Indian food with no buffet.

Whether by suggestion or fate, after Evolution I went in search of lunch and ended up at the Indian restaurant Namaste Cafe. With a door so welcoming, how could I not go inside?

The cafe/restaurant is in a sunny old duplex with a bright exterior, including a gorgeous mural. 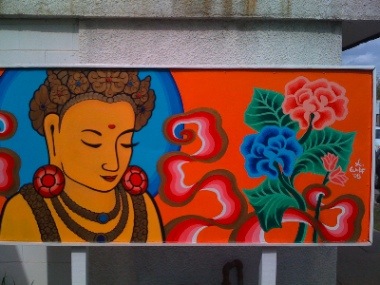 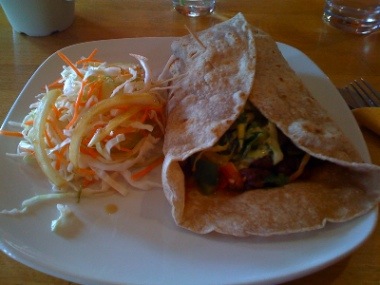 I loved every bite. As I ate, the front door was open, letting in the spring breeze, and next to me a table of mixed-race, mixed-age people were discussing the challenges of creating a civil society. “What did Margaret Mead say?” said the white-haired Indian woman, as they listened carefully to one another and jumped in and out of the conversation.

Namaste Cafe is just like yoga class, only you get to eat. A meal here leaves you feeling grounded, connected, and a little more open in your heart.